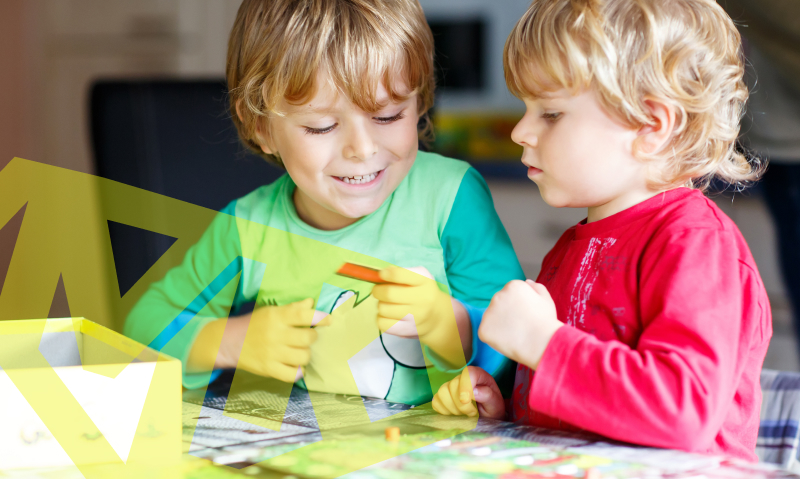 Transform this unexpected time at home into an opportunity.

As we practice social distancing, many households are finding themselves in uncharted waters. The new normal finds you with more time at home than you ever imagined. Make the most of this time by grabbing a board game and making memories with your kids!

Choosing a board game you’re not familiar with is always a chance. What if it’s too difficult for your child? What if the rules are too complicated?

With this in mind, we’ve outlined several board games to help you choose the most appropriate game for your child. Below is a rundown of five board game selections that will help entertain your family.

The game board is a map of the United States, with routes connecting major cities. The routes vary in length from one to six spaces, and each route’s spaces are a single color. These colors correspond to the train cards which players can draw on their turns. To claim a route with three red spaces, you must spend three red train cards.

On a player’s turn, they choose one of three actions to take: take train cards, use their train cards to claim a route, or take new destination ticket cards. Points are gained as players build their network, with each completed destination ticket worth additional points at the game’s end. Be sure to complete those destination tickets though, as unfinished tickets will cost you valuable points.

With rules that can be learned in 10 to 15 minutes, Ticket to Ride offers gameplay which is clear enough for younger gamers to understand while still providing strategy challenges for more advanced players.

As children, many of us played the game “telephone.” This is where one person would whisper a word or phrase into someone’s ear, who would then whisper into another person’s ear, and so on until it returned back to the start. At that point the last person would say what they heard, and the first person would say the actual starting word.

Telestrations is built on the idea of the telephone game, but with a twist: instead of speaking to the next person, you draw them a picture based on your starting word. The game starts with each player having a card that contains words numbered one through six. A die is rolled, and everyone writes their target word inside their booklet.

Players will either be drawing a picture from what is written on the previous page, or trying to put into writing what was drawn by the previous player. A timer is used to ensure that everyone has the same amount of drawing or guessing time. Once a booklet makes it back to where it started from, everyone shows the group the pictures and guesses.

One of the best aspects of Telestrations is its flexibility. If you’re playing with younger children, encourage them to choose a word on their own instead of writing one based on a die roll. If your players are talented artists who find joy in the drawing phase, leave the timer in the box and let them draw away. Tailor the game to fit your needs, and you’re sure to have a good time.

Most board games start with the same step: place the board on the table. In Carcassonne, however, you spend the game building the board from 72 tiles. Each tile will contain at least one of the four basic features: cities, roads, cloisters, and fields. As the board expands, players will attempt to score points by completing these features, while also creating the landscape depicted on the tiles.

Building the board in Carcassonne is similar to the assembly of a jigsaw puzzle. On their turn, each player draws a tile from a facedown stack and chooses where it will be placed. There are rules around placement, however, as features have to match to fit together properly. If one side of a tile has a field with a road, it must be placed next to a tile that also has a field with a road. Every tile will have many allowed placements, although not every feature will be completed by the game’s end.

When a tile is placed, the active player has the choice to place one of their pieces (colloquially known as meeples) on one of the tile’s features. Once completed, the player scores points and removes their meeple from the board. The rules for completion vary by feature, and some will score more points if completed during the game than if they are scored at the end.

Carcassonne features a simple ruleset and interesting, engaging gameplay that will delight gamers of all ages. As the board grows and changes, new opportunities will arise and you will find yourself hoping to pull that perfect tile from the stacks.

After a long day, finding the mental capacity for a board game can challenge even the most avid gamer. If you find yourself in that position, reach for a copy of Qwixx. A fast, light dice game, Qwixx can be explained and played in about 15 to 20 minutes, which makes it perfect for those tired evenings.

In the box, you will find six dice (two white dice, and one each of red, yellow, green, and blue) and a pad of scoresheets. The object of the game is to cross out as many numbers as possible on your sheet before the end of the game. The scoresheet consists of four rows, each with a different color. The red and yellow rows count up from 2 to 12, while the green and blue rows count down from 12 to 2.

On their turn, the active player rolls the four colored dice and the two white dice, announcing the total of the white dice to the table. Each player then has the option to cross off that number in one of their rows. So if the white dice total seven, each player can cross off a seven on one of their rows. The active player can then choose to combine a white die with a colored die, crossing off that number on the corresponding row.

The catch here is that the rows have to be filled in from left to right. Skipping numbers is fine, but you can never go back to fill in a number you’ve skipped. If, on your turn, you skip the red “4” and cross out the red “5,” and then you won’t get a chance to cross out the red “4” on a later turn. You’re out of luck.

Fast and fun, Qwixx is a game that is perfect for those moments before dinner. It’s also ideal for that “one last game before bed” request. Since each player has the opportunity to use the white dice when they are rolled, Qwixx will keep even the most distracted gamer in the action right until the end.

In a game of Forbidden Island, players assume the roles of adventurers exploring a slowly sinking island in search of the four treasures hidden among the ruins. Each player will have their own special ability to aid them in the search, but only by working together will the adventurers find the treasures and escape the island.

Unlike the other titles on this list, Forbidden Island is a cooperative game. Every player has their own character and can choose what to do on their turn, but the only way to win is to work together. As the game progresses, options are discussed and strategies are formulated as a group. This also presents an excellent opportunity for a younger participant to team up with an older one, as everyone is working toward the same goal.

The board is made up of 24 tiles laid out on the table, each depicting a different site on the island. Players will move on these tiles, searching for the hidden treasures and other items to help them in their quest. Four actions are available to a player on their turn, and their character ability will augment one of these actions to some degree. As the game progresses the island will sink into the water, possibly taking one of the treasures (or one of the adventurers) along for the ride.

While offering engaging gameplay and a fun cooperative experience, the highlight of this game is the replayability. With six different adventurers to choose from, three different difficulty levels, and an island map that will be different every time you play, no two games of Forbidden Island will ever feel the same!

We hope this list of games provides you with some alternative choices to keep your family entertained for days to come. All of us here at Must Love Kids hope your family is well and that you’re enjoying your time together. We’ll see you soon.